I am a Research Space Scientist in the Planetary Environments Laboratory (Code 699), part of the Solar System Exploration Division (Code 690) at NASA Goddard Space Flight Center. Previously, I was a Postdoctoral Fellow of the NASA Postdoctoral Program in the Planetary Systems Laboratory (Code 693) at Goddard Space Flight Center, working with Dr. Geronimo Villanueva.

I am interested broadly in planetary atmospheres, more specifically in aeronomy and atmospheric chemistry. My current research is focused on the atmosphere of Mars and uses data collected by the Neutral Gas and Ion Mass Spectrometer (NGIMS) onboard the NASA Mars Atmosphere and Volatile EvolutioN (MAVEN) mission and the Nadir and Occultation for MArs Discovery (NOMAD) insrument on the ESA ExoMars Trace Gas Orbiter (TGO). Scroll down to the Research section to read more.

Scroll down to find out more about me, the research I do, and where I will be next! 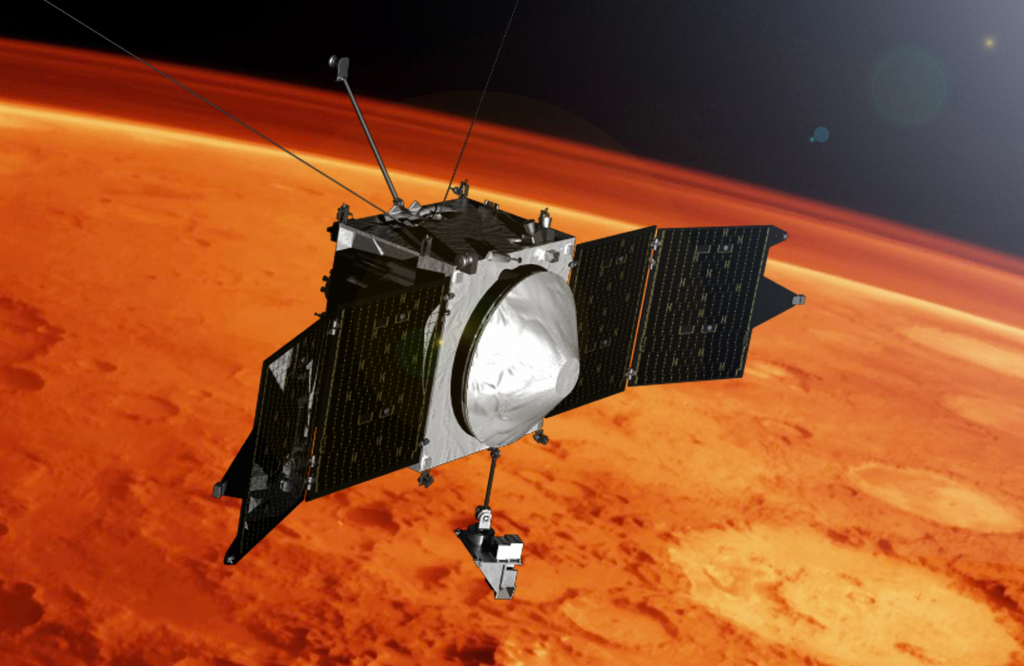 We use MAVEN NGIMS data to investigate the composition of the Martian upper atmosphere, focusing on the variations of CO2, Ar, N2, O, He, and H2 with Martian local time, latitude, season, and temperature. We find large diurnal variations in the abundances of the lighter species: N2, O, He, and H2. Our measurements are the first vertical profiles and the first spatially- and temporally-resolved measurements of the H2 abundance on Mars. 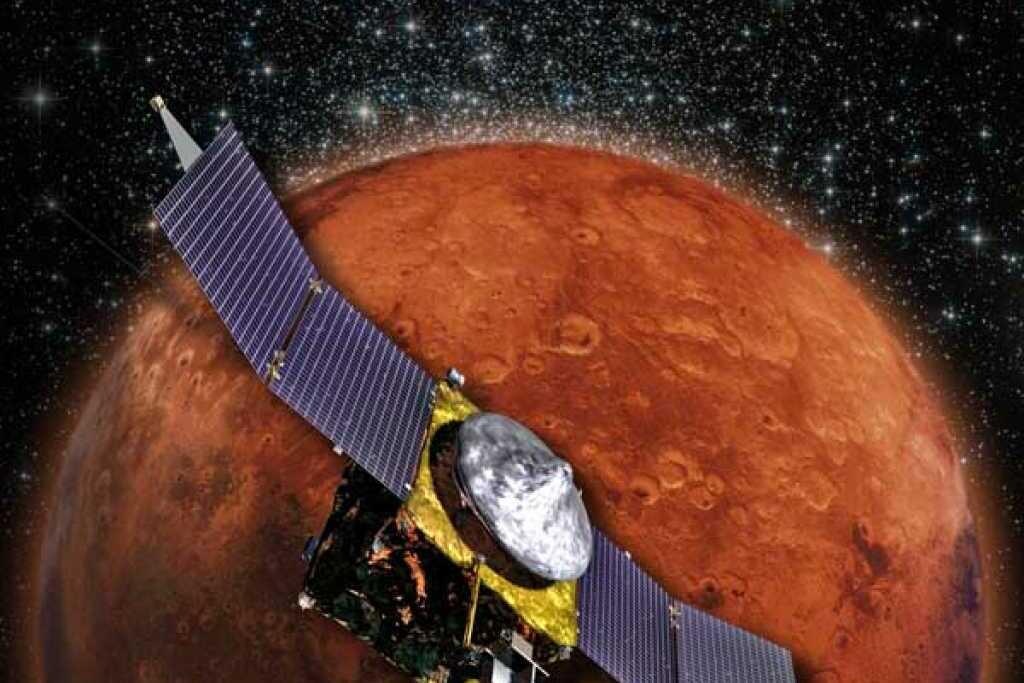 We derive neutral temperatures from Ar, CO2, and N2 abundances measured by MAVEN NGIMS over 1.5 Martian years. The temperature profiles cover an altitude range of 150 to roughly 300 km on nominal orbits. During Deep Dips, temperature profiles extend down to about 125 km, near the mesopause. We characterize thermospheric gradients and exospheric temperatures. The thermal structure of the Martian upper atmosphere is important for quantifying loss of the atmosphere to space.

Figure. Shown here are the abundances of CO2, Ar, N2, O, He, and H2 as measured by NGIMS on a single MAVEN aerobraking orbit.

We use NGIMS data to investigate the variation of the major neutral species in the Martian upper atmosphere (CO2, Ar, N2, O, He, and H2) with local time, latitude, season, and temperature (which we also derive from NGIMS measurements). Diurnal variations of the lighter species are large and driven by day-to-night transport. 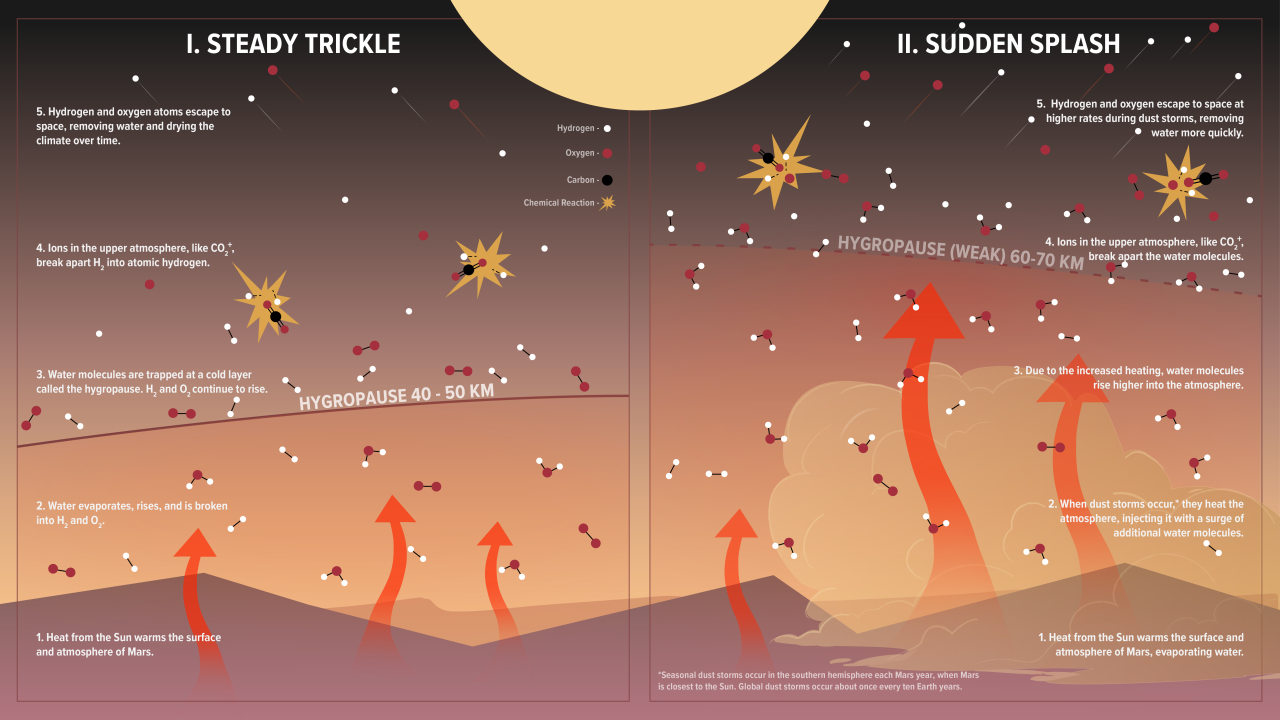 Abstract. Mars has lost most of its once-abundant water to space, leaving the planet cold and dry. In standard models, molecular hydrogen produced from water in the lower atmosphere diffuses into the upper atmosphere where it is dissociated, producing atomic hydrogen, which is lost. Using observations from the Neutral Gas and Ion Mass Spectrometer on the Mars Atmosphere and Volatile Evolution spacecraft, we demonstrate that water is instead transported directly to the upper atmosphere, then dissociated by ions to produce atomic hydrogen. The water abundance in the upper atmosphere varied seasonally, peaking in southern summer, and surged during dust storms, including the 2018 global dust storm. We calculate that this transport of water dominates the present-day loss of atomic hydrogen to space and influenced the evolution of Mars’ climate.

This work was published in Science:

Thermal Structure of the Martian Upper Atmosphere from MAVEN NGIMS

Figure. (left/top) The diurnal variation of the temperature in the upper atmosphere of Mars, covering an altitude range of ~150-250 km. (right/bottom) Mean temperature profiles for the first 8 Deep Dips executed by the MAVEN spacecraft.

Abstract. The Neutral Gas and Ion Mass Spectrometer (NGIMS) aboard the NASA Mars Atmosphere and Volatile EvolutioN (MAVEN) mission measures the structure and variability of the Martian upper atmosphere. We use NGIMS density profiles to derive upper atmospheric temperature profiles and investigate the thermal structure of this region. The thermal structure of the upper atmosphere is a critical component of understanding atmospheric loss to space, the main science objective of MAVEN, and measured temperatures serve as inputs to and constraints on photochemical and global circulation models. We describe proper treatment of the NGIMS data and correct for the horizontal motion of the spacecraft. Temperature profiles from week-long, low-altitude excursions executed by MAVEN, called Deep Dips, are used to investigate the diurnal variation of the temperature and the thermospheric gradient, which varies between 1.33 ± 0.16 and 2.69 ± 0.33 K km−1 on the dayside. NGIMS measurements acquired on nominal MAVEN orbits over more than a Martian year further elucidate the diurnal and latitudinal variations of the temperature. Diurnal variations of about a factor of 2, from 127 ± 8 to 260 ± 7 K, are observed high in the exosphere, and latitudinal variations of 39 ± 17 K are observed in this region. Comparisons indicate broad agreement between temperatures derived from MAVEN NGIMS with previous in situ and remote sensing observations of upper atmospheric temperatures. NGIMS temperatures are also shown to be consistent with predictions of a 1-D model which includes solar UV and near IR heating, thermal conduction, and radiative cooling in the CO2 ν2 15-μm band.

This work was published in JGR: Planets:

Upcoming and past talks and posters.